As a new year begins, it is a good time to review developments of the past twelve months and to announce some changes in GSE for 2007. Since November 2005, GSE has received 122 new manuscripts, accepted 42 articles (of which 19 were submitted before November 2005) and still has 32 manuscripts in evaluation. Thus the number of submitted manuscripts is constantly increasing while the number of published articles is maintained at around 40 per year. Published articles originate from 15 countries with Spain leading (10), followed by the USA (5), Australia, France and Germany (4 each), UK (3), China, Denmark and Finland (2 each) and finally, Brazil, Canada, Greece, Japan, Norway and Slovenia. Of these 42 published papers, 19 deal with methodologies of quantitative genetics and their applications to animal selection and characterization, six address genetic diversity of populations and breeds and seven fall in the field of molecular genetics. These figures clearly show that GSE is attractive to the animal quantitative genetics community and has acquired a strong experience and reputation in this domain.

To answer this increasing demand, we have asked two new associate editors to join our editorial panel and are pleased that they have agreed: Denis Couvet from the Muséum National d'Histoire Naturelle (France) specialized in conservation biology and population genetics and Frédéric Farnir from the University of Liège (Belgium) whose research interests focus on the genetic and functional study of QTL involved in agricultural traits.In this editorial note, we also wish to inform you about our misfortune with the calculation of the 2005 Impact Factor published in June 2006 in the "Journal of Citation Reports" by Thompson Scientific. Based on our calculations, the published 2005 IF 1.62 turned out to be erroneous and in disfavour of GSE, which Thompson Scientific has acknowledged. The true 2005 IF is 1.783 and thus, GSE occupies the 5th position in the section "Agriculture, Dairy & Animal Science" and the 82nd in the section "Genetics & Heredity". Corrections in JCR have been done in October 2006.Finally, GSE and EDP Sciences wish to keep up with the rapid changes of publication systems, i.e. the advent of "Open Access" publishing, to make scientific research widely and freely available. Thus, we are happy to announce that as a first step in this direction, GSE now gives the possibility to authors to choose how they want their paper to be published by offering the "Open Choice" option. With this option, authors can have their articles accepted for publication made available to all interested readers (subscribers or non-subscribers) as soon as they are on-line in exchange of a basic fee, i.e. 550 euros for papers published in 2007 (without VAT).With all this news, we offer the collaborators, authors and readers of GSE our season greetings and best wishes for a successful and productive New Year 2007. 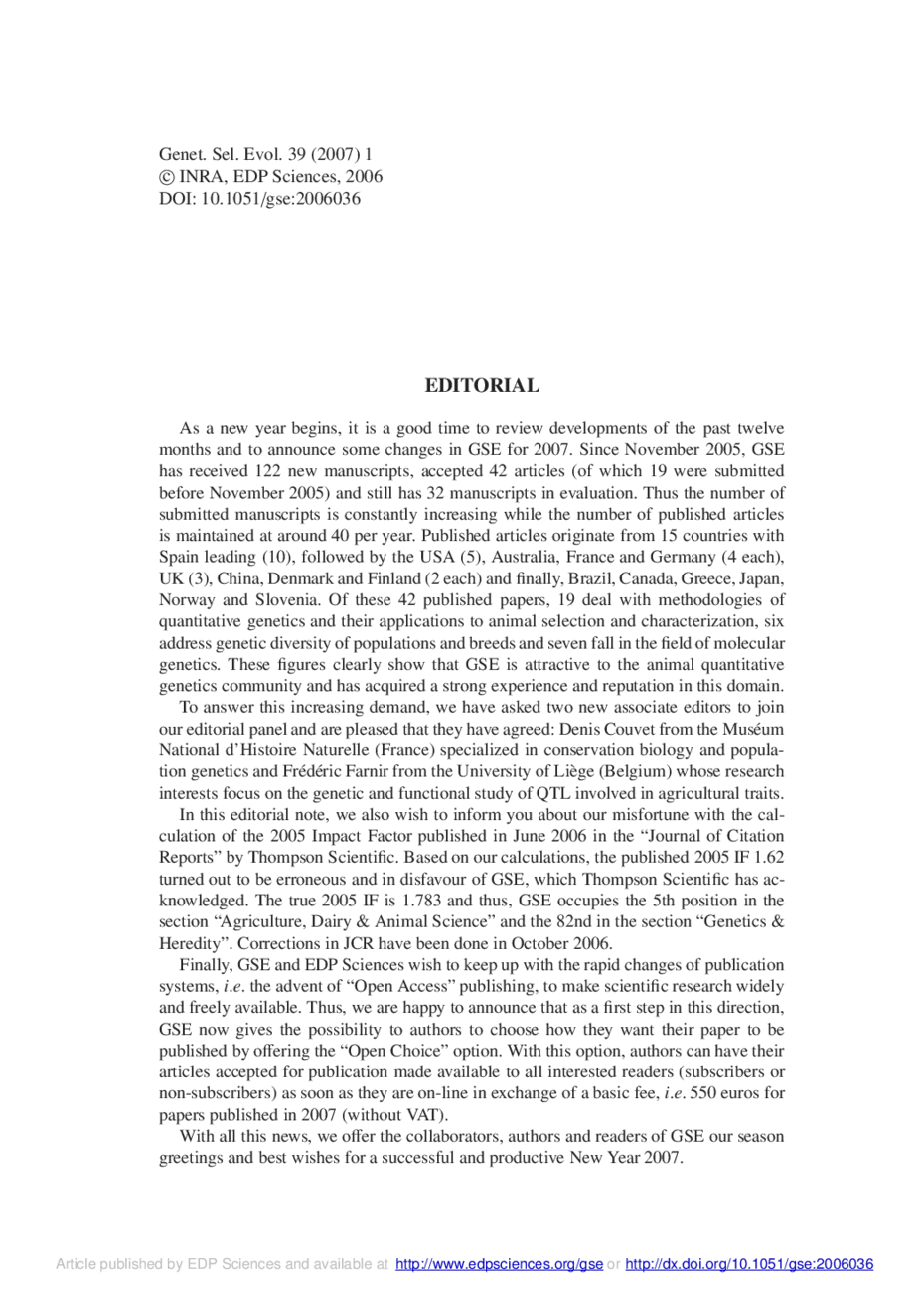